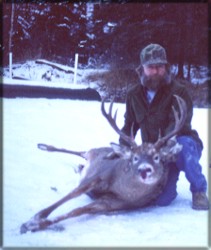 Our season starts at the end of August with hunting for bear over bait. Hunters may use bows, rifles, pistols, muzzleloaders, or shotguns. We begin baiting our sites a month before the season opens, and position our hunters on the most active sites. We continue to bait the sites for you during the hunting season, and also help take care of your bear after the kill (including skinning the bear).

Deer hunting begins with the archery season, which starts the first of October. We're a bowhunting household and well-attuned to

bowhunter's needs as far as stand sites, shooting lanes, etc. Deer sightings are numerous as they are feeding heavily before the rut and the upcoming winter sets in.

Also in October is the state's annual one-week moose hunt, which is by lottery. Application deadline for resident and non-resident moose hunters is April 15. We are in the southwest zone. Last year, a moose hunting lottery winner on a semi-guided hunt here shot a deer with a bow one day, and a moose with a firearm the next day!

switch to the firearm season on deer. Doe hunting permits are called "any deer" tags, and allotted by lottery in Wildlife Management District. We are in WMD 8. The Jackman area is known for large bucks over 200 pounds - one in 4.75 deer registered at the Jackman tagging station in 1998 weighed over 200 pounds. The first week, 16 of 50 deer tagged ranged from 200 to 268 lbs!!!

In the first week of December, muzzleloader season opens. Last year, two deer were taken by four hunters staying at Riverview to muzzleloader hunt. Al Wisell of Rutland, Vermont, hunting unguided, took a 183-pound buck sporting a rack with a 23-inch spread. Lisa Price, Jackman, hunting fully-guided, took a 135-pound four point, her first buck with any kind of firearm. Muzzleloader season in Jackman is known for the "second rut" and tracking snows. Bring your snowshoes, you may need them.

So you know the difference between semi-guided and fully-guided: Semi-guided is a pre-scouted spot where we have placed a tree stand or ground blind, and you are on your own until you take your deer. We then assist you with the removal/tracking of the deer. Fully-guided is a small group hunting according to the conditions and assisted by the guide throughout the day from one piece of woods to another.